The primary causes of tornado deaths and injuries are wind and wind-driven debris. Refuge areas need to provide protection in all directions (including overhead) from both of these hazards.

Whether you are choosing a refuge area in your home, or are trying to find the best location in unfamiliar circumstances, the basic ideas are the same. "Inward and downward" creates distance from all exterior areas of a structure. "The more walls the better" provides as many barriers as possible between you and the outside.

The locations that provide the best protection are: 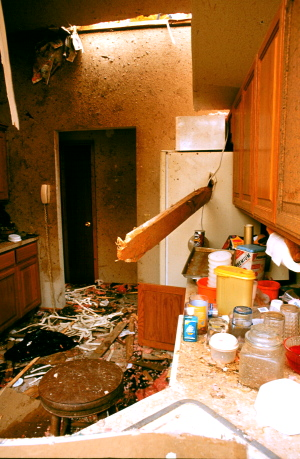 Violent winds and wind driven debris cause most tornado deaths and injuries. Tornadic winds can not only cause major structural damage, they turn even harmless every-day items like soda cans, dishes, pieces of boards, shingles, etc. into deadly projectiles. Straight-line winds can also pack a destructive punch. Keep that in mind when deciding where to take refuge.

Indoors, With a Basement

Mobile homes are especially vulnerable during severe weather. According to U.S. Census Bureau statistics, approximately 6.1% of the population lives in mobile homes, but mobile home residents make up an estimated 38% of tornado fatalities. Residents need to plan safe places (with family, friends, etc.) to go to ahead of time.

Designating refuge areas in the home and work place is a preparedness must, but there are other situations to consider as well. It may be necessary to seek refuge in different types of buildings or unfamiliar surroundings.

Many public places are of long-span construction, meaning large open spaces with 40 feet or more between structural supports. This type of construction can be especially vulnerable to wind damage and hazardous to occupants during severe weather.

Grocery stores, department stores, public indoor pools, shopping complexes that have indoor open glass atriums and courtyards are some examples of buildings that we all use frequently and have long span characteristics.

In circumstances such as those, locations providing the best protection may be bathrooms, offices, meeting rooms, dressing rooms, or service corridors. Considering these types of "what if's" ahead of time, will help decision-making when the time comes.

Substantial buildings are the best protection. Avoid placing yourself in this extremely dangerous situation by avoiding travel in or near areas with active warnings in effect. If you find yourself outdoors when a tornado is approaching:

Emergency managers are concerned over a growing public perception that highway overpasses offer acceptable refuge locations from tornadoes. This may have been contributed to by popular videos, including footage taken on a Kansas interstate, that showed individuals taking refuge under bridges who survived, implying that it is the proper thing to do. If possible, drive away from severe weather.

In reality, there are a number of factors affecting the outcome in these instances, including luck. The tornado's strength, its proximity to the overpass, and the type of bridge construction are just a few.

Similar to the bridge in the Kansas interstate video, some have relatively large girders and supports that a person might actually fit behind or be able to hang on to. Many, if not the majority of others have girders that are too small and others have none at all, leaving people with nothing to crouch behind and nothing to hang on to. That leaves people completely exposed to wind debris, and/or likely to be blown out.

Even for those with larger girders, while they may offer limited protection from winds coming from 1 direction, tornado winds rotate, completely changing directions in a matter of seconds. Evidence has shown that winds may have been deflected for a time, but as the vortex passed, the rotating wind shifted, blowing through underpasses (blowing people out) and blasting directly into the spaces beneath the bridge, driving debris with such force that metal was embedded into the concrete.

It has also been documented that motorists stopping to shelter under bridges have blocked all traffic lanes, preventing others from reaching shelter. According to witness reports during an Oklahoma tornado, many motorists abandoned their vehicles in order to shelter under bridges 15 minutes before the tornado arrived. The traffic approaching 1 bridge was described as "a ¼ mile long parking lot."

There have been increasing amounts of documentation following tornadoes passing close by or directly hitting bridges, that indicate the outcome is likely to be tragic. Those taking refuge under overpasses are often blown from their locations and/or battered by the debris driven directly into the spaces beneath the overpasses. Consistently the results have been either fatalities or life-threatening, gruesome injuries, that left survivors with permanent disabilities.

It cannot be stressed enough that a refuge needs to provide barriers from wind and debris in all directions. Bridges cannot do the job. View a detailed report on bridges and tornadoes following the Oklahoma City supercell.