About the New Madrid Fault

One of the most prominent features on the U.S. Geological Survey (USGS) Seismic Hazard map is the red high hazard zone surrounding the New Madrid Seismic Zone; as high as other western areas famous for quake activity. The zone is active, averaging more than 200 measured seismic events per year.

The New Madrid Fault extends approximately 120 miles southward from the area of Charleston, Missouri, and Cairo, Illinois, through Mew Madrid and Caruthersville, following Interstate 55 to Blytheville, then to Marked Tree Arkansas. It crosses 5 state lines and cuts across the Mississippi River in 3 places and the Ohio River in 2 places.

The fault system in the New Madrid Zone is poorly understood and studying it poses some unique challenges. In the central U.S., fault features are not expressed at the surface. They are covered by 100-200 feet of alluvial soil. 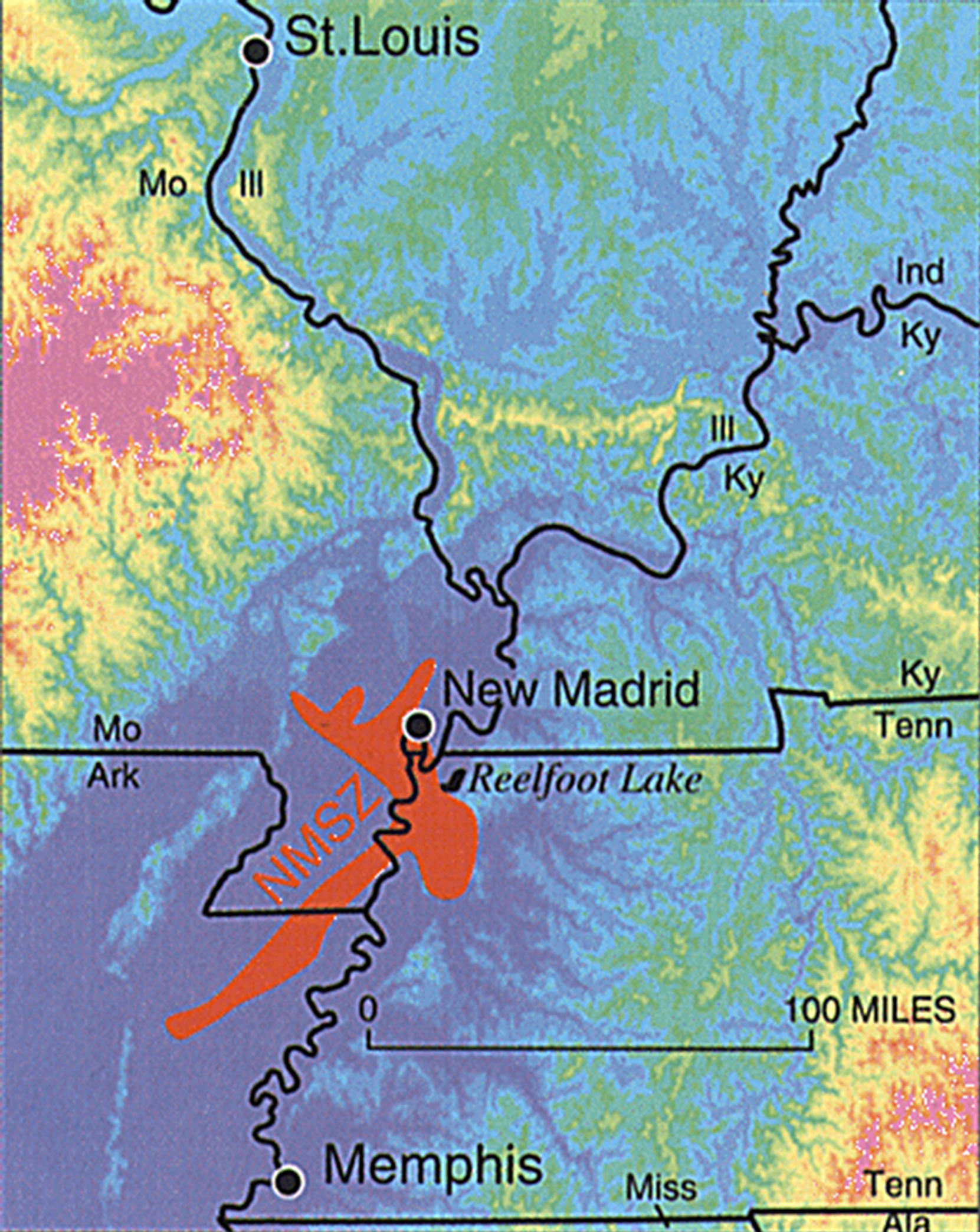 Unlike the West Coast where major quake activity is more predictable based on measured movement at tectonic plate boundaries, New Madrid is located near the center of the North American Plate. The crust in the central U.S. is being deformed / strained slowly in contrast to conditions in the west. What has been learned in studies there may not apply here.

Another contrast is due to a difference in geological characteristics. The harder, colder, drier, less fractured crust in the central U.S generates greater shaking over larger areas than quakes of comparable magnitude in the west. Shake and damage areas are up to 20 times larger than similar West Coast quakes.

Earthquakes cannot be predicted. The likelihood or probability can be calculated from patterns of recurrence in the past. Based on evidence of quake activity found in geological features, scientists estimate that the average interval between magnitude 7.0 quakes or greater is approximately 500 years. This is more frequent than expected.

Apparently, "New Madrid" sized events have occurred before 1811. Evidence of similar activity has been found, dated around 900 A.D., and again in 1450 A.D. Current research has indicated large quake activity going back at least 5,000 years. Damaging quakes have occurred in the New Madrid Zone since then. Two of the strongest include a magnitude 6.0 on January 4, 1843 centered near Marked Tree, Arkansas, and a magnitude 6.6 on October 31, 1895 centered near Charleston, Missouri. 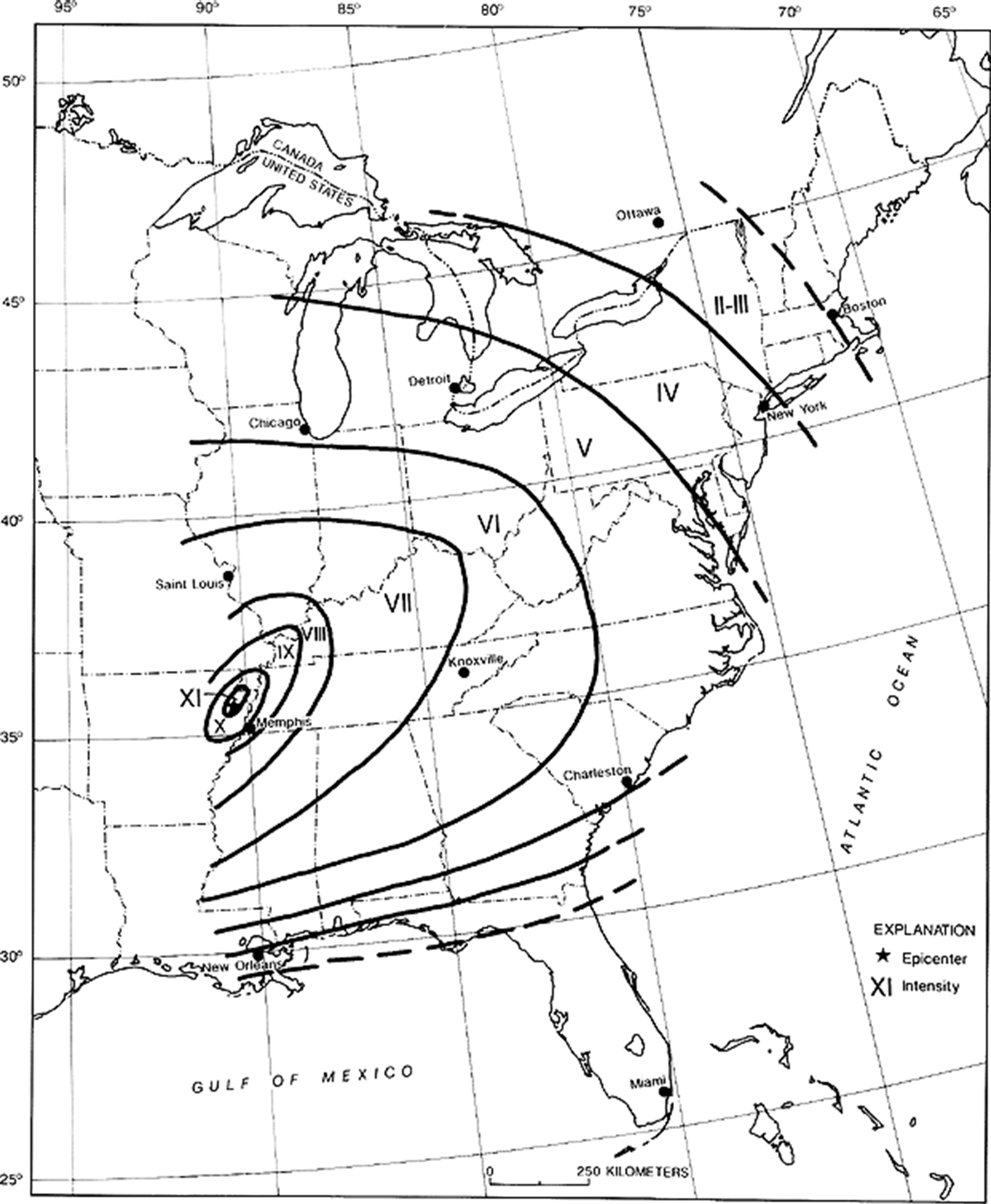 The Charleston quake, the strongest since 1811, damaged every building in the commercial area of Charleston. Cairo, Illinois, and Memphis, Tennessee, also suffered significant damage. Near Charleston, 4 acres of ground sank and a lake was formed. It was felt over all or portions of 23 states and at some places in Canada.

In the 200 years since 1811, changes to the areas that would be affected by major quake activity in the zone have been drastic. Sparsely populated and developed then, there were approximately 5,700 residents in St. Louis in 1811. Today an estimated 11 to 12 million live in the St. Louis to Memphis region.

Urban development, along with the increase in population, elevates the potential for fatalities and injuries, and damage to infrastructure by a similar event in modern times. Some estimates project that damage in Missouri alone could reach $6 billion for a major earthquake.

In 1811, there were no seismographs in the region until the first seismograph was installed at St. Louis University in 1909. Today approximately 270 seismic stations monitor the region in a cooperative network.

What many refer to as the Great New Madrid Earthquake, was actually a seismic event made up of 3 major quakes, followed by thousands of aftershocks, ranging from strong damaging quakes and diminishing to weaker quakes that lasted for years after the main shocks. The 3 main shocks were estimated at magnitudes 7.7, 7.5, and 7.7. As there were no seismograph stations in the region at that time, magnitude estimates vary widely (from 7.7 to 8.1) based on interpretation of journal accounts, damage reports, and descriptions of effects from that time.

The effects of the quakes were extensive and dramatic. Land deformation and elevation changes, both uplift and subsidence, created major land features such as the St. Francis Sunklands in northeast Arkansas, Reelfoot Lake in western Tennessee, and temporary waterfalls on the Mississippi River. Vast tracts of land were flooded. The most severely affected area is estimated at between 78,000 and 129,000 square kilometers. Large regions of fertile land were made unfit for farming for many years afterward by landslides, sandblows, fissures, and flooding. Thousands of sandblows are still visible today.

On the Mississippi River, miles of high river embankments collapsed and entire islands were reported submerged. The river was filled with debris, navigation channels changed, and large waves were generated. Turbulence capsized boats.