St. Charles County’s system is part of a larger system implemented concurrently in both St. Louis and Jefferson counties, increasing the capability of the entire metropolitan St. Louis area in responding to major disasters. First responders across different departments and municipalities are able to communicate with each other. The system provides better coverage, improving the level of service to residents.

Those interested in the project may view the tower site map and learn more about the site identification process by watching the video on the St. Charles County Emergency Radio Communications System. 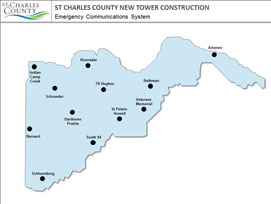 At the beginning of 2013, guidelines mandated by the Federal Communication Commission (FCC) caused previous radio communication systems to become obsolete. An updated digital radio system with 12 transmitter tower sites was implemented and has greatly enhanced the two-way radio communication capabilities between dispatch centers and field units. The system provides interoperability among agencies and counties during times of natural or man-made disasters and/or other large-scale incidents. The radio system became fully functional in January 2015.

The Next Generation 911 phone system became operational in November 2015. This system handles more than 130,000 wireless and landline 911 calls each year county-wide. This system has two remote host locations, which are Cloud-based for backup purposes. Updates to the new system in 2017 included the ability to receive 911 calls via text.