The history of St. Charles County Regional Airport – Smartt Field (SCCRA) goes back to the early 1940s. The U.S. Navy purchased the grounds from Ruth Neubeiser, and constructed an octagonal, eight-runway airfield complete with an outer circular taxiway, hangars and barracks. They used it as an auxiliary training field during the early years of World War II. 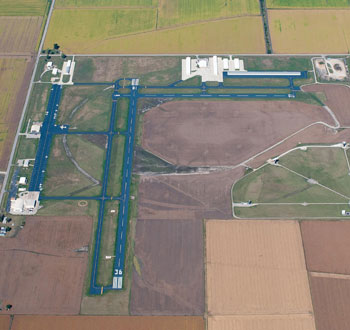 Originally named Neubeiser Field,  it was renamed Field #34512 by the Navy. At the start of World War II, the name was changed again to Smartt Field in honor of Ensign Joseph Gillespie Smartt, who killed in the Japanese attack on Pearl Harbor Kaneohe Bay, Hawaii, Dec. 7, 1941. He was the first St. Charles County resident to be killed in the conflict.

In 1957, the federal government deeded the airport grounds, then consisting of 184 acres, to the City of St. Charles and St. Charles County. The City subsequently released their portion in 1976 to the County.

Today, the airfield is approximately 312 acres with over 1.5 million square feet of paved surface. In 2020, the airport's name was changed to St. Charles County Regional Airport – Smartt Field Airport to reflect both the Federal Aviation Administration (FAA)'s and the State of Missouri's designation of SCCRA as a regional airport.