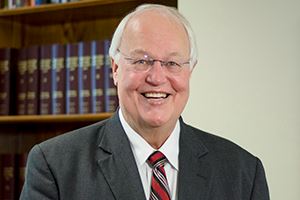 Steve Ehlmann is in his fourth term as St. Charles County Executive, having first been elected in 2007. Prior, he served as the County’s Director of Administration.

Ehlmann has served in all three branches of government. He was a member of the Missouri House of Representatives from 1989 to 1993, representing the City of St. Charles’ 19th District; served in the Missouri Senate from 1993 to 2001 in St. Charles County’s 23rd District; and was Associate Circuit Judge and Circuit Judge from 2001 to 2004 in Missouri’s 11th Judicial Circuit. While in the Senate, Ehlmann served two terms as Republican Floor Leader.

A lifelong resident of St. Charles County, Ehlmann serves on the President’s Community Advisory Board for Lindenwood University, and speaks to many community organizations about St. Charles County history and governmental issues. He is a member of the Executive Board of the East-West Gateway Council of Governments, Board of Directors of the St. Louis Regional Chamber, and Ex-Officio Member of St. Louis Civic Progress.

Ehlmann and his wife Jean have two sons.